Effective 4th March 2016: where helmets are worn at ACDS activities they must comply with at least one of the following codes and its proviso(s):

Helmet Standard EN1384 will remain in place until 31st December 2016. As of 1st January 2017 helmets which are certified to EN1384 only, will not be acceptable for use at ACDS activities. 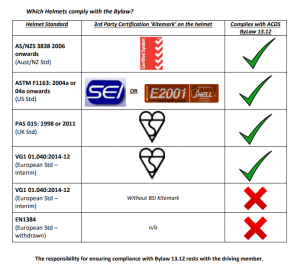